Mountain Dew White Label was a Mountain Dew flavor that was pre-released in January 2017, alongside Green Label on select colleges and universities campuses across the United States. It was later officially released in early 2017. The flavor's tagline was "DEW with crafted tropical citrus".

Mountain Dew Green Label was a pineapple-grapefruit flavored soda. It's sold in 16 oz cans similar to that of Black Label. It is described as "Mysteriously Exotic Dew".

In January 2017, Green Label was pre-released on select colleges and universities campuses across the United States.

In March 2017, it became available for the public in the United States as a permanent flavor.

As of May 21st, 2019, it was rumored that the Label series would be discontinued in this year.

As of July 24th, 2019, it was confirmed by a Pepsi employee that the Label Series was discontinued. First Green Label, then White Label, and then Black Label. 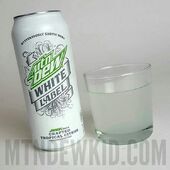 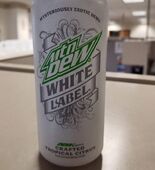 Mountain Dew flavors in the fridge. 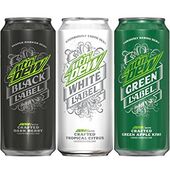 Mountain Dew Label Series in 16oz cans.
Add a photo to this gallery
Retrieved from "https://mountaindew.fandom.com/wiki/White_Label?oldid=49583"
Community content is available under CC-BY-SA unless otherwise noted.