Kickstart (Energizing Midnight Grape) is a Mountain Dew Kickstart flavor that was released in the United States in January of 2016.

Kickstart (Energizing Midnight Grape) is a grape-flavored soda designed to have more caffeine and to energize you; as the name suggests.

It was released in Canada on January 20th, 2017 as the fourth Kickstart beverage available in the country. 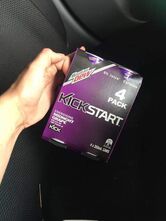 An image of a Australian 4-Pack of Midnight Grape. 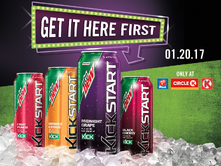 Four Mountain Dew Kickstart flavors.
Add a photo to this gallery
Retrieved from "https://mountaindew.fandom.com/wiki/Kickstart_(Energizing_Midnight_Grape)?oldid=49725"
Community content is available under CC-BY-SA unless otherwise noted.