Dewitos was a Mountain Dew flavor that was tested in late 2014 on select colleges and universities campuses across the United States. It was claimed to be a Nacho Cheese Doritos flavor. It was later discontinued from testing, possibly due to the reactions of Reddit users and other social media sites, which may have deterred PepsiCo from releasing Dewitos.

Dewitos was Doritos Nacho Cheese flavored Mountain Dew and was orange in color. Some students claimed that the flavor was similar to LiveWire with a Doritos aftertaste or liquid nacho cheese.

In late 2014, Mountain Dew was reportedly testing a Nacho Cheese Doritos flavored Mountain Dew, alongside Lemonade with Ginger, and Mango Habanero on select colleges, and university campuses across the United States as far back of October 2014.

On November 9th, 2014, PepsiCo released a statement confirming they were developing Dewitos. The company said it has a “flavor vault” filled with interesting ideas and occasionally lets potential customers sample new flavors in order to choose what products it will bring to stores.

As of November 10th, 2014, Pepsi hadn't announced any plans to sell Dewitos. It was speculated that by the reactions on the Reddit post and social media sites may have deterred PepsiCo from releasing Dewitos.

Unfortunately Dewitos and Lemonade with Ginger never officially released beyond testing. However, the Mango Habanero flavor was brought back as a limited edition Game Fuel flavor re-named as Mango Heat in 2016. 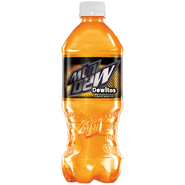 A fan-made bottle image of Dewitos.
Add a photo to this gallery
Retrieved from "https://mountaindew.fandom.com/wiki/Dewitos?oldid=48749"
Community content is available under CC-BY-SA unless otherwise noted.