Vote in various ways via social media for one flavor to become permanent.

DEWcision 2016 was a Mountain Dew promotion that involved a limited-time return of Pitch Black and Baja Blast to store shelves from April 18th, 2016 to July 9th, 2016. The promotion involved fans voting in various ways on the two flavors, with the winning flavor remaining on store shelves past the promotion.

The promotion ended on July 9th, 2016 with the votes tied at 50-50. The winner was announced on July 18th on Facebook and Twitter. With more than 2.9 million votes, Pitch Black was claimed to have edged out Baja Blast by less than a half of a percent of the total of 5,789,284 million votes.

The official website was formerly found here for this promotion. However, it currently redirects you to the main Mountain Dew page due to the promotion being discontinued. Some of the art used remains available at Yun Chen's Dewcision VR page.

Although the official result of the campaign was the victory and subsequent, at-the-time permanent, release of Pitch Black, several fans claim that the promotion was allegedly rigged from the beginning to have Pitch Black end as the resulting winner and Baja return to Taco Bell as its own exclusive with promotional limited-time runs. Additional factors appear to add proof to these claims, including:

Nevertheless, Pitch Black became the permanent flavor in 2016, after the promotion ended. Many had complained in the following months about difficulty finding the drink, despite its alleged permanence. Since then, in 2019, it got effectively discontinued throughout, with little, if any, remaining distribution within the United States.

That as of May 1st, 2019, in a Reddit post, a Pepsi employee claimed that Pitch Black recently been officially discontinued due to low sales throughout its permanent release. From this, it has appeared to be somewhat of a misnomer, though - Mountain Dew officially claims it hasn't nationally discontinued yet. Several people have still managed to find unexpired 20oz bottles and 12-packs, albeit very sparsely, along the Midwest region.

Soon after, 12-packs were left discontinued entirely, and 20-ounce bottles followed shortly afterward in early 2021, resulting in both sizes are cut from independent Pepsi bottlers in the Midwest. From Pitch Black got discontinued from these both sizes, the only production of Pitch Black relies upon the soda fountains of certain convenience stores across the United States.

These convenience stores are Maverick, Sheetz, and Kum & Go of some of their stores. Though Pitch Black got replaced from other dew flavors, such as Cyclone as the new Speedway exclusive flavor, it is currently on the verge of being exhaustively discontinued in soda fountains, then entirely for good for the United States as a whole. The reason for such discontinuation appears to have been poor sales of the drink, with reports that Caffeine-Free Mountain Dew, a flavor very sparsely produced and distributed, had sold better than Pitch Black in early 2019.

Baja Blast, on the other hand, has maintained a high level of popularity - it not only remains at Taco Bell but continues to get occasional releases in bottles and cans, with the highest amount of sales each limited-time release outwards. 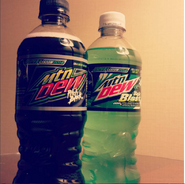 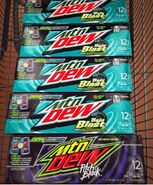 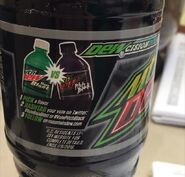 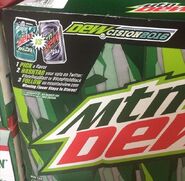 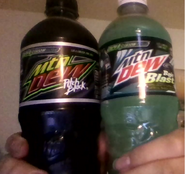 Pitch Black and Baja Blast in bottles, as of April 15th.