To promote the limited-time 2011 summer release return of two competitors from DEWmocracy alongside a earlier released Dew flavor.

Back By Popular DEWmand was a promotion coinciding with the 2011 summer release of 2004's Pitch Black, 2008's Supernova and 2010's Typhoon returning from popular demand for a limited-time.

The concept for Back By Popular DEWmand is mostly self-explanatory. When a great-tasting Mountain Dew flavor was discontinued from a limited-time run, there were people that wanted a specific flavor back at least to experience it, or to have a chance to taste their favorite flavors once again.

On January 12th, 2011, Mountain Dew announced on Facebook that Pitch Black would be returning, additionally, Typhoon on April 15th, followed by Supernova on May 1st, nationwide for a limited time.

The trio returned in the Summer of 2011, when two flavors, Pitch Black and Supernova, were released nationwide in cans and bottles. While the third flavor, Typhoon, was only distributed in 2-liter bottles exclusively at Walmart stores, unlike those two flavors in the promotion.

All three flavors stayed on shelves from May, and their limited run ended in July that year. 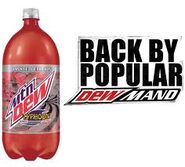 Typhoon's promotional artwork for Back by Popular DEWmand.
Community content is available under CC-BY-SA unless otherwise noted.
Advertisement